Catherine counts as a distinct life honor the fact that she is trusted with matters of great importance to the individuals, families, non-profit organizations, and corporations she serves. She is determined in her quest to find solutions to complex immigration questions, and she has resolved many “impossible” cases in her clients’ favor.

Catherine has litigated immigration cases at every state and federal court and administrative agency level in the state of Colorado. She has also represented clients across the United States before USCIS and immigration courts, and internationally before American consulates abroad. Catherine has testified as an expert in immigration matters in state and federal court in Colorado. She has taught immigration law classes to the community and to attorneys. She has been published on professionalism issues and immigration law. She is licensed in the State of Colorado, the U.S. District Court for the District of Colorado, the Ninth Circuit Court of Appeals, the Tenth Circuit Court of Appeals, and the United States Supreme Court.

For her dedication to her field and community, Catherine has been repeatedly recognized by Law Week Colorado, Super Lawyers and 5280 Magazine. Of special importance to her, her law practice has led to the enjoyment of many friendships with her peers, her clients, and her colleagues. 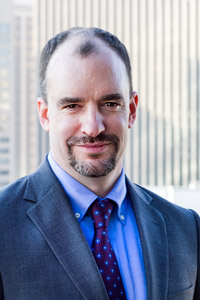 James Lamb is Senior Associate Attorney at the Chan Law Firm, where he practices in the areas of immigration law and federal and state civil litigation.

James was born in Albany, Georgia. He earned a Bachelor of Arts, with a double major in English Literature and in History, at the St. Mary’s College of Maryland in 1997. Subsequently, he became a high-school teacher and taught in Japanese public schools for three years through the Japan Exchange & Teaching (JET) Program. Afterward, he taught middle and high school students at a private school in Tokyo, spending a total of almost a decade living and working in Japan.

James returned to the United States in 2007 to attend law school at the University of Colorado – Boulder. For his volunteer work, he was awarded the Argosy Distinguished Volunteer Award by the Center for Energy and Environmental Security (CEES). It was in law school that James discovered his true calling: immigration issues. In addition to his coursework, James interned at the Immigrant Legal Center of Boulder County and, after being licensed to practice law, took pro bono cases from the Rocky Mountain Immigrant Advocacy Center (RMIAN).

James has many years of experience working on immigration cases, including removal (deportation) defense, family-based applications, and business / employment issues. He is admitted to practice before the federal Tenth Circuit Court of Appeals and the federal District Court for the District of Colorado.

James is also active in the local, legal community. He is a member of the American Immigration Lawyers Association (AILA) and presently services as Chair of the DMV and Soc. Sec. Admin. Liaison Committee. He is also a member of the Colorado Bar Association and is on the Executive Committee of the CBA’s immigration law section. He frequently attends legal nights as a member of the Colorado Lawyers Committee and often gives presentations for local groups, including the Denver Public Libraries, the Asian Pacific Development Center, and Aurora Mental Health, among others.

James is fluent in Japanese and speaks some Spanish, which he continues to enthusiastically study.

Josh was born in Washington, D.C., and grew up in the surrounding suburbs. He earned a Bachelor of Arts, with a major in Philosophy and a minor in Spanish, from the University of Virginia in 2003. After graduating, Josh spent three years living in the Dominican Republic as a Peace Corps volunteer, where his primary projects were working with rice-growing cooperatives and building composting latrines.

Josh returned to Washington, D.C. in 2006 and worked as the Public Benefits Manager at the Whitman-Walker Clinic, where he supervised a team which helped clients enroll in and maintain Medicaid, Medicare, and other local and national benefits programs, as well as advocating for programmatic improvements.

After moving to Denver in 2011, Josh attended law school at the University of Denver. While in law school he focused on immigration law, interning with the Denver Immigration Court and Rocky Mountain Immigrant Advocacy Network (RMIAN). He also spent a week at the family detention center in Dilley, Texas, working with women and children kept in jail by the government while they pursued asylum.

Josh has dedicated his career to immigration law, and has experience in a wide variety of cases, including removal/deportation defense, family-based applications, U visa and VAWA petitions, and business/employment applications. He is a fluent Spanish-speaker. Josh is also an active member of the Colorado legal community as a member of the American Immigrant Lawyers Association (AILA) and the Colorado Bar Association. He regularly volunteers at legal nights at Mi Casa and Centro San Juan Diego to provide free legal information to members of the community, as well as at pro bono citizenship workshops to help community members become U.S. citizens.